Young musicians from Perth & Kinross presented a program of mixed classics, jazz and rock at the Courtyard of the Green Hotel, Kinross. The event was organised in support Scotland’s Covid-19-hit musicians, by Kinross-shire Local Events Organisation (KLEO) – and coordinated by Bouwien Bennet and Gosia Stanton.

Gosia paid tribute to the work of all the local volunteers who helped bring the event – particularly Jamie Montgomery from the Loch Leven Beer Garden and the staff at the Green Hotel.

Gosia writes, “Last Sunday in August (30th) was celebrated in Kinross with a long awaited live performance of young local musical talent. The organisers of the concert, KLEO (Kinross-shire Local Events Organisation) have been supported by the local business – Green Hotel who hosted the concert in their beautiful courtyard. A hundred local residents attended this event which was well managed according to the COVID rules on distancing and outdoor events agreed with the Perth and Kinross Council following the Scottish Government guidelines.”

“The concert was a free contribution from the artists and organisers to raise funds for Help Musicians Scotland, who provide help, support and opportunities to empower musicians, including Health and Welfare services and Creative development funding”.

The program presented by the young talented musicians ranged from light classics, popular songs, film music, blues and rock. There were beautiful performances of classics such as ‘Meditation’  and ‘Salut D’Amour’ for violin and Debussy’s ‘Arabesque No.1’ for piano. An arresting performance of the famous aria from opera ‘Pagliacci’ was played on cornet. Jazz, pop and film music was performed on various combinations of violin, guitar, piano and voice.”

“A high energy performance of original songs and covers by local rock band ‘Trading Glances’ finished the show with aplomb. It was very well received by the audience who showed their appreciation by generously donating over £300 to Help Musicians Scotland.”

Gosia’s daughters, Ola and Zosia, joint leaders of Perth Youth Orchestra, many of whose talented musicians were part of this concert, brought an array of brilliant string playing, guitar and violin duo and poignant vocals.

Caroline Sewell from Musicians Union Scotland suggested that “outdoor live performances could be a very helpful first step and that would not only bring income for the musicians, but would allow community to re-engage with music.” What next for the Arts in Scotland” online debate, 3rd July 2020.

Andrew Mitchell, who recorded the event,  commented on the quality of performances, “the talent on display was amazing, and it is much more joy than you can imagine to hear LIVE music again after so many months.”

Sharon Doyle, a local violin teacher and musician, said the concert was “wonderfully uplifting  at a time when musical activities and performance opportunities had declined.”

A stream of the concert will take place on Sunday, 6 September at 3pm – link and some parts of the concert will be available for late views after that too. There is also a Justgiving page open for kind donations in support of Help Musicians Scotland on https://www.justgiving.com/fundraising/helpmusiciansscotland

More than £300 was raised at the concert for Help Musicians Scotland but you can still help them achieve their target £500 is you are enjoying this stream. We would like to support please go to their JustGiving Page.

Fred Stuger: “Walking on the right side”, “Easy live blues”, “Blues for my baby”, “Babysit blues” and “Walking the blues”

“The lazy trumpeter” by Edrich Siebert

‘On with the motley’ by Leon Cavallo

‘Arabesque No. 1’ by Claude Debussy

‘Every breath you take’ by the Police

‘My future’ by Billie Eilish

‘Tonight you belong to me’ by Irving Kaufman

An untitled piece by Eleanor Baughan

‘Blinding lights’ by The Weekend

‘Just the two of us’ by Grover Washington Jr. & Bill Withers

‘Who would’ve thought’, ‘A stroke of luck’ and ‘Rewind’; ‘Everybody wants to rule the world’  by Tears for Fears

More than £300 was raised at the concert for Help Musicians Scotland but you can still help them achieve their target £500 is you are enjoying this stream. We would like to support please go to their JustGiving Page. 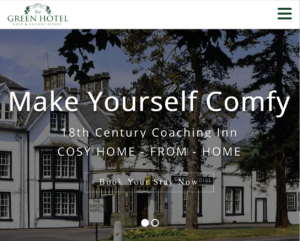 Here you can find information on Kinross Farmers’ Market, Kinross-shire Winter Festival and KLEO (Kinross-shire Local Events Organisation), the charity behind these and other exciting events in and around Kinross’ vibrant local community. Kinross is a small town on beautiful Loch Leven, in the Scottish county of Perth and Kinross. It is surrounded by many small villages and farms which together make up the community of Kinross-shire. 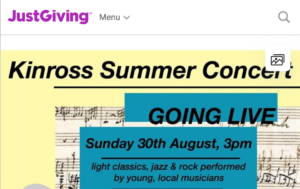 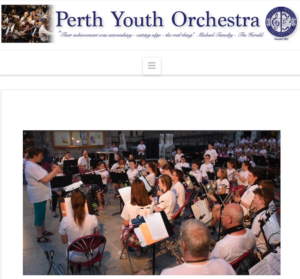